Cook the Books Reads The Language of Baklava 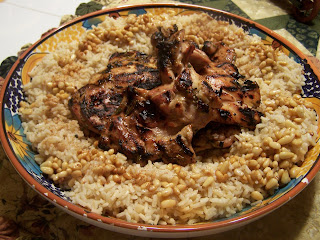 What can be better than having friends who share your passion for books and food? Thanks to Cook the Books (http://www.cookthebooks.wordpress.com/), a food blog created by Debbie of Kahakai Kitchen (http://www.kahakaikitchen.blogspot.com/) , Rachel, The Crispy Cook (http://www.wheat-free-meat-free.blogspot.com/) , and Jo of Food Junkie not Junk Food (http://www.jodimop.wordpress.com/), I have been introduced to several wonderful texts that I might otherwise have missed. Our current selection, The Language of Baklava by Diana Abu-Jaber, is one of those books that I just can't let go of. Unlike most of my books which I donate when I'm finished reading them, this volume is stashed away among my cookbooks.

"...my dad says cooked cabbage should be like a lady's skin," I say, then catch myself, distressed that I've actually quoted Bud.
But Mr. Basilovich is pleased by these thoughts of a kindred spirit. "Yes, of course, like the softest skin. The butter, how it works through the cabbage leaves! And the taste of the lamb comes next--he looked delicately at his wife--"like a kiss."
Olga looks away, embarrassed by her father, who has gone in one moment from intellectual and aloof to too sensual and nakedly emotional. "Dad, come on, don't talk about food like that," she says, and folds her arms. "It's just food."
This passage, and so many others in Diana Abu-Jaber's memoir The Language of Baklava, resonated with me. They immediately called to mind passionate, emotional conversations I have shared with family and friends about the foods we love. Our unabashed moans and squeals of delight as we've licked the spoon clean of dark, creamy voluptuous chocolate or described a meal or a particular food as better than sex belie Olga's belief that "it's just food." These visceral emotions about tastes and smells and cooking and food weave throughout the stories that Abu-Jaber spins about her brash, but lovable father Bud, a Jordanian immigrant for whom food evokes the memories of his homeland.
As I read about first one and then another of Bud's schemes, most revolving around opening a restaurant, I remembered my maternal grandmother and the wonderful, if short-lived restaurant she opened. Too used to feeding family, it was difficult for her to treat the restaurant as a business instead of as an extension of her kitchen.
The scene where Bud and his brothers struggle to butcher the lamb reminded me of stories of my paternal grandmother, who died when I was just 3. She would don an old fur coat that hung inside the chicken coop before wringing the chicken's neck and plucking it clean for dinner. No one ever explained to me why she wore the fur coat or if it were only during the winter that she wore it. It was just another of our family's many tales of remembrance, many of which revolved around food.
By the time I'd read halfway through the book, I felt as if Bud were another of my many cousins or uncles and I dreaded the time when I'd get to the last story.
On a different note, Abu-Jaber's memoir made me realize more fully how incredibly brave people must be to emigrate from their homeland. Being a third-generation American of Italian descent, it is difficult to imagine having to give up everything that is familiar and to replace it with that which is different or strange or, at the very least, inexplicable. The struggle between the lure of his new country and the memories of all that was dear to Bud could only be quieted by his recreating the scents and tastes that he grew up with in his new land. Food is the tie that binds most of us to our family traditions and memories.
Initially, I worried about what dish to cook from this wonderful memoir. I don't eat lamb and I haven't prepared many middle eastern dishes. I wanted to recreate something from the book itself instead of just a dish reflective of the Jordanian culture. I finally decided upon Bud's special rice and grilled chicken. I confess that I was thinking these would be rather pedestrian dishes, so I figured I'd spice things up by making maple-roasted butternut squash as an accompaniment.
I needn't have worried. Larry took one bite of the chicken and pronounced it fantastic. I had to agree. As for Bud's special rice, although I lightened it up a bit, it was still incredible. I felt like a doubting Thomas for having wondered if cinnamon and rice in anything but rice pudding could work. I can guarantee that both dishes will be included in my rotation and that I will serve them both next time I host a buffet.
Bud's Special Rice (with some healthy alterations) - Serves 4-6
4 1/2 cups water
1 tsp salt
2 cups brown rice
3 tbs butter, divided
1/4 cup pine nuts
1 tsp ground cinnamon
freshly ground pepper
In a medium saucepan, bring the water, 1 tbs butter, and salt to a boil, add the rice, and boil for 2 minutes. Turn to low, cover the saucepan, and simmer for 25 minutes, until the water is absorbed. As the rice cooks, melt the remaining butter and saute the pine nuts until they are golden. Place the rice in a serving dish, sprinkle with the toasted nuts and butter, and sprinkle with the cinnamon and pepper.
"Distract the Neighbors" Grilled Chicken - Serves 4
2 tbs olive oil
3 garlic cloves, crushed
juice from one lemon
3 tsp brown sugar
3 sprigs rosemary, chopped (must be fresh, not dried!!)
1/4 tsp ground cumin
salt and pepper to taste
2 lbs skinless, boneless chicken thighs
In a gallon bag, mix the oil, garlic, lemon juice, brown sugar, and spices. Add the chicken, stirring to coat with the marinade. Seal bag after removing the air and refrigerate for at least 3 hours, turning occasionally.
Place the chicken on a hot grill and grill 6-7 minute on one side. Turn over and grill an additional 3-5 minutes, until chicken is cooked through. Serve with Bud's special rice. 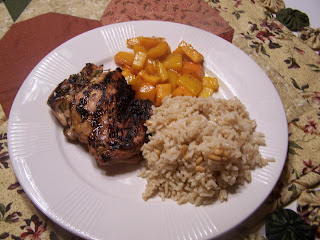 If you love to read and love to cook, please drop by Cook the Books. I can't wait for our next journey.
Posted by Arlene Delloro at 2:06 PM