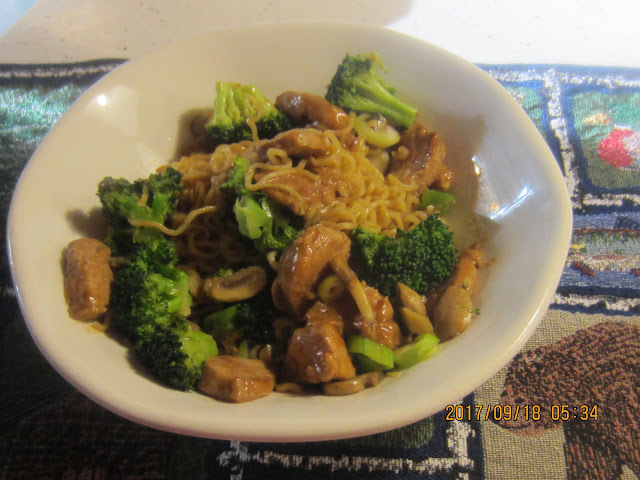 Maybe it's my age, but I had never before eaten ramen noodles--not those little packages loaded with sodium, or the real thing from a noodle shop. Because I have come to trust the recipes at Cook's Country magazine, as soon as I saw the recipe for ramen noodle bowls, I knew I had to try it.

I made the recipe (almost) exactly as written, but will add a few ingredients and streamline the instruction next time. Oh, yes! There will be a next time.

Instructions
Whisk 1 tbs hoisin, 1 tbs soy sauce, and cornstarch together in a medium bowl. Add sliced pork and toss to coat. Set aside.

Whisk broth, remaining 1 tbs hoisin, and remaining 2 tbs soy sauce together in a large measuring cup and set aside.

Heat 1 tbs oil in large, nonstick skillet or wok over medium-high heat until shimmering. Add mushrooms and cook until browned, about 5 minutes. Add ginger and garlic and cook until fragrant, about 30 seconds. 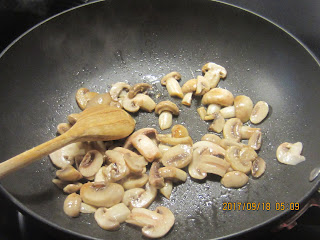 Add broth mixture and bring to a boil. Arrange the noodles in skillet in a single layer; cover, reduce heat to medium.  Cook about 3 minutes. Noodles will be soft on bottom, but still dry on top. 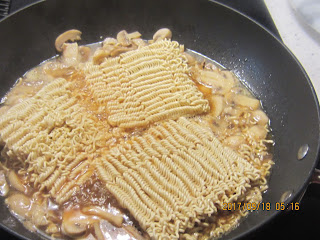 Uncover skillet and use tongs to flip noodles and stir to separate. Spread noodles in an even layer and scatter broccoli over the top of them. Cover and cook until noodles and broccoli are tender, about 3 more minutes, tossing halfway through. 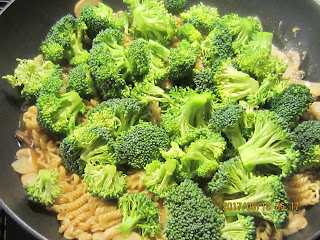 Divide mixture evenly among 4 individual bowls and tent with foil.*

*The purpose of doing this is to make this a one-skillet dish. In the future, I will use a second skillet and cook the pork at the same time.

Wipe out the skillet with a paper towel. Add the other tbs oil and heat over medium-high heat. Add the pork in a single layer and cook until browned on one side (1-2 minutes). Flip each slice and brown the other side, then stir to make sure pork is cooked through. Divide among the 4 bowls and top with the scallions. 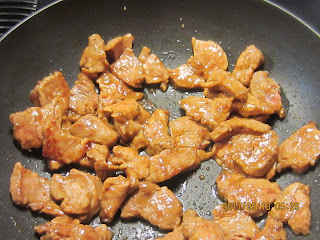 ***************************************
TASTE NOTES
Let's just say, this was love at first bite. OMG! I couldn't believe how unbelievably delicious (and low in points) this dish was. Yes, there is a bit of preparation involved. In the future, I'll do all the chopping well in advance. It wasn't a difficult dish to make and it will go more smoothly the next time using a nonstick wok AND a nonstick skillet. My decision to decrease the amount of hoisin was a good one; I think it would have been cloying with more. I will probably add some shredded carrot, some chopped water chestnuts, and some shitake mushrooms in the future. I might even add some nuts.  However, this dinner was enjoyed with lots of yummy noises just as it was.