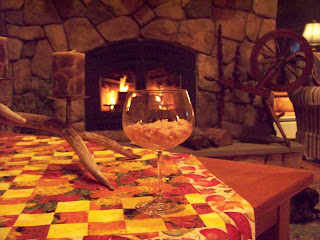 This was the weekend I finally caught up with all the clipped recipes I've been putting aside to try. I weeded through them and placed them in a separate binder so that I can add them to the cherished "favorites" binder if they make the cut.
Having made friends with the slow cooker, I decided to try this very simple recipe taken from The Gourmet Slow Cooker, Vol. II as reprinted in First magazine.
Servings 7-8*; 5 WW pts (based on 7 servings)
1 cup brown Arborio rice, rinsed (I only had white Arborio)
5 cups 2% milk
1/2 cup honey
1 tbs pure vanilla extract
1/2 tsp cinnamon (I easily quadrupled that; you can never have too much cinnamon)
dash salt
In a slow cooker, combine all the ingredients. Cover and cook on low for 4 hours, or until creamy. Serve warm or chilled.
*I only got 7 servings because I used the old slow cooker and used the "3" setting instead of between "1" and "2" and I burned the serving on the bottom.
*******************************************
TASTE NOTES
I prefer my rice pudding with raisins, but I knew Larry wouldn't touch it if I put in those sweet, plump lovelies. This is a very dense rice pudding, almost pink in color because of my love of cinnamon. As a sidenote, studies have revealed that a phytonutrient in cinnamon called methylhyudroxy chalcone polymer can spur a huge acceleration in sugar metabolism, a side bonus. The honey sweetened it perfectly. If you like a custardy rice pudding, this one isn't for you. It reminds me more of the one you're likely to be served in a diner. I liked it and will try to reduce the calories a bit more next time.
Posted by Arlene Delloro at 4:21 PM 7 comments: