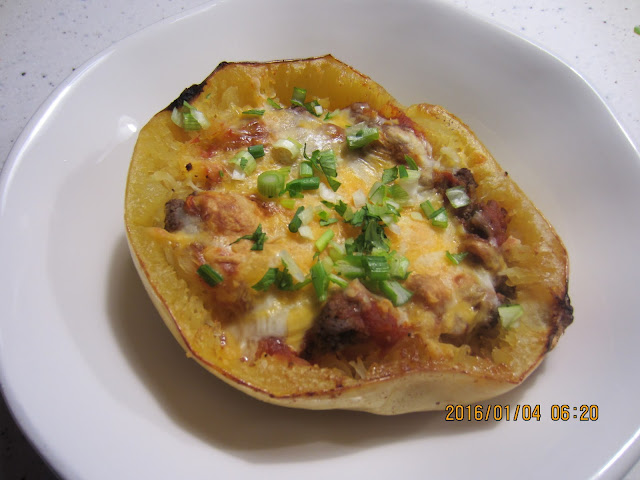 I love when someone else lightens up a recipe or takes a food that I like and remakes it into a healthier option. I've been following Gina's blog for a long time (before she renamed it Skinnytaste and partnered with Weight Watchers) and what I love about it is that her food tastes good and offers normal-sized portions that don't leave you starving.

I tried spaghetti squash for the first time a few years ago and, as was the craze, used it to replace real pasta. Big mistake. I like spaghetti squash, but it will never taste like pasta. I should have just used it as a delicious side dish or experimented with it on my own.

When I saw how Gina used it highlight the flavor profile of enchiladas, I knew this was something we'd enjoy. One of the reasons I don't like one of the other well-known Weight Watcher blogs is because the recipes are for what I call "ersatz" food. They attempt to recreate fast food (why?) using ingredients like Fiber One cereal (AKA tree bark). They don't taste anything like the original and they don't satisfy. This recipe isn't enchiladas and doesn't promise to be, but it has a similar flavor profile and the spaghetti squash is just the vehicle for delivering that flavor.

Preheat oven to 400F degrees. Line a baking sheet with parchment paper (or two if they don't fit). Cut the squash in half lengthwise, and use a spoon to scrape out the seeds and soft yellow strands. Brush the inside of the squash with 2 teaspoons of olive oil and sprinkle lightly with salt and pepper. Place the squash facedown on the baking sheet and bake for 45-50 minutes or until the flesh easily pierces with a fork.Once the squash is cool enough to handle, use a fork to scrape the inside so the strands appear. 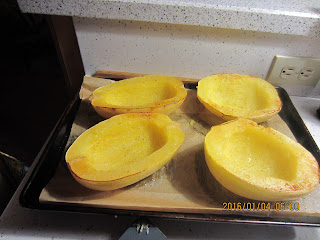 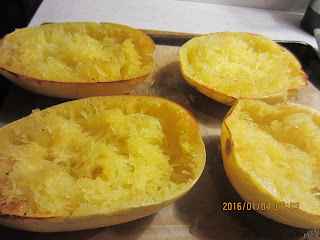 Add 1/4 cup of the enchilada sauce to the browned meat. Spoon  the remaining enchilada sauce mixture inside each squash bowl ansd top evenly with the cheese. Transfer them to the oven and bake another 15 minutes, until the cheese is melted and the sauce is hot. Remove from the oven, sprinkle with cilantro and scallions and serve immediately. 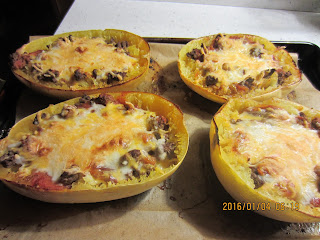 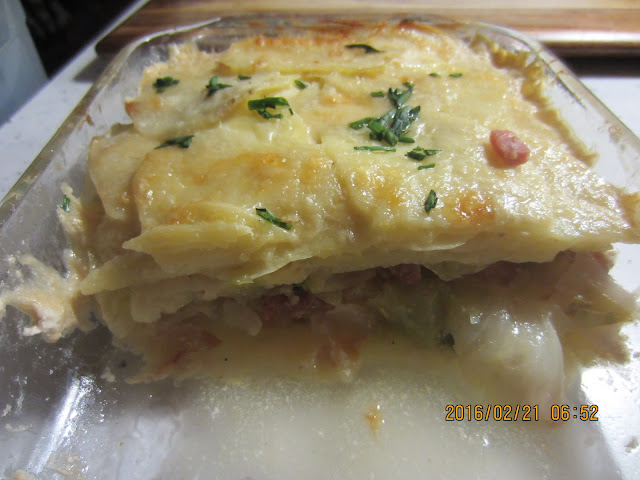 If I'm home during the day, I'm apt to watch The View. While I think there's a lot of nonsense that goes on during the show, I watch because I'm a huge fan of Chefs Michael Symon and Mario Batali. During one of last week's show, Michael Symon put together a simple gratin that he deemed a side dish, but that I thought would make an excellent one dish dinner. Of course it would have to be lightened up, but I didn't think that would be a problem. Since I had put up some vacuum-packed bags of spiral ham, I decided to make the dish for Sunday dinner. Here is my version of the dish:

Melt the butter in a deep skillet or pot. Add the garlic and cook 30 seconds, stirring. Add ham and cabbage and cook, stirring occasionally, for about 10 minutes. Drain excess liquid.

Place sliced potatoes (do NOT soak in water) into the half and half. Stir in the paprika and about 1 1/2 cups of the shredded cheese.

Cover tightly with foil and bake covered for 45 minutes. Carefully remove the foil and bake an additional 20-25 minutes, until the top is nicely browned, Let cool for 10 minutes before serving.
***********************************
TASTE NOTES
I ran this recipe through the Weight Watchers' recipe builder. One-fourth of the casserole, a very generous serving, was 13 points. It was well worth it. While I've no doubt that additional butter and heavy cream would be delicious, they weren't missed at all. Replacing Chef Symon's deli ham with my spiral ham definitely elevated this dish. As we were eating, I mused aloud that this would be an excellent St. Patrick's Day dish if I just substituted corned beef for the ham and perhaps added some carrots. I'll let you know.
Posted by Arlene Delloro at 7:25 PM No comments: