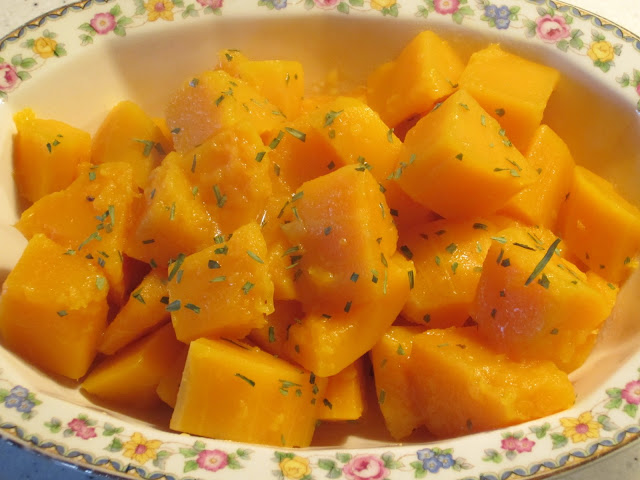 For some reason, I've only ever glazed carrots. I can't imagine why it never occurred to me to use the same preparation for other vegetables. That changed when this month's Fine Cooking magazine arrived. Food writer Michael Ruhlman waxes poetic about super chef Thomas Keller's "eye opening" lesson on how to glaze vegetables, a preparation often used at Keller's French Laundry.

I typically use chicken or vegetable broth along with a bit of sugar and butter to glaze my carrots. I decided for the purposes of food research to use Keller's version on some cut up butternut squash. The major difference is that Keller uses water, not broth. While there were no hard and fast measurements for the sugar and butter, there were some useful tips about how to ensure the vegetables don't overcook before the liquid, sugar, and butter mixture glazes them. Here's what I did:

Use a large pot that will hold all the vegetables in one or more snug layers. It's important not to spread them out in a huge pot. Add just enough water to cover the vegetables and add the sugar and butter.Bring to a boil over high heat. Check the vegetables after they've been boiling for 10 minutes. If they're cooked through but there's still a lot of liquid in the pot, remove the vegetables and let the liquid continue to cook until it's syrupy, then add the vegetables back in. If the glaze forms before the vegetables are cooked, just add a bit more water and let them cook longer. Mine were done perfectly after 12 minutes of rapid boiling.

The most useful hint was to listen for a "sharp, frenetic bubbling sound, almost a crackle." Ruhlman was right about this. When you hear this sound, lower the heat because the glaze is just about done. Sprinkle with chopped tarragon and serve.
****************************************
TASTE NOTES
I was afraid that substituting water for the chicken broth would produce a less flavorful dish, but that was not the case. The suggestions regarding the timing of cooking and the sound to listen for to catch the glaze at precisely the right moment were spot on. That said, while the glazed butternut squash was delicious, I prefer to roast this winter vegetable with some olive oil. That produces a lovely carmelization that just tastes better to me. I will, however, use Keller's method on my usual carrots and on the next bunch of broccoli I buy.
Posted by Arlene Delloro at 7:00 AM